Sourdough is the “King of Breads” (according to some), however it’s the daily bread here in the Moorbakes kitchen. I did a post last year about how I make it, however since then a few things have changed, so here’s an update with pictures and wordes.

Firstly what is sourdough bread? Simply put, its bread made without commercial yeasts. It relies on natural yeasts present on every grain of wheat (spelt, rye, etc.) which have been fed and watered and kept alive for use in bread. This goes by various names – The “mother”, or “starter”, “levain”, and so on. They’re all the same thing – active natural yeasts working alongside lactic acid bacteria to ferment the bread and give it a mild acidic tang.

Some people keep their starters at room temperature – this is fine, but at room temperatures, the yeasts and bacteria will be working very fast – so-much so, that the culture will need feeding daily, and that means feeding it, then throwing away the excess… This Scottish baker doesn’t like the sound of that, so I keep mine in the fridge. It still works, just slower.

So we start by taking the mother out of the fridge to use in our bread. I use the mother directly from the fridge unless I need more than is in the jar – then I take some from the jar, add in flour and water and leave that on the counter for a few hours to get going, then use that in the bread (and top-up the jar and put it back in the fridge again) 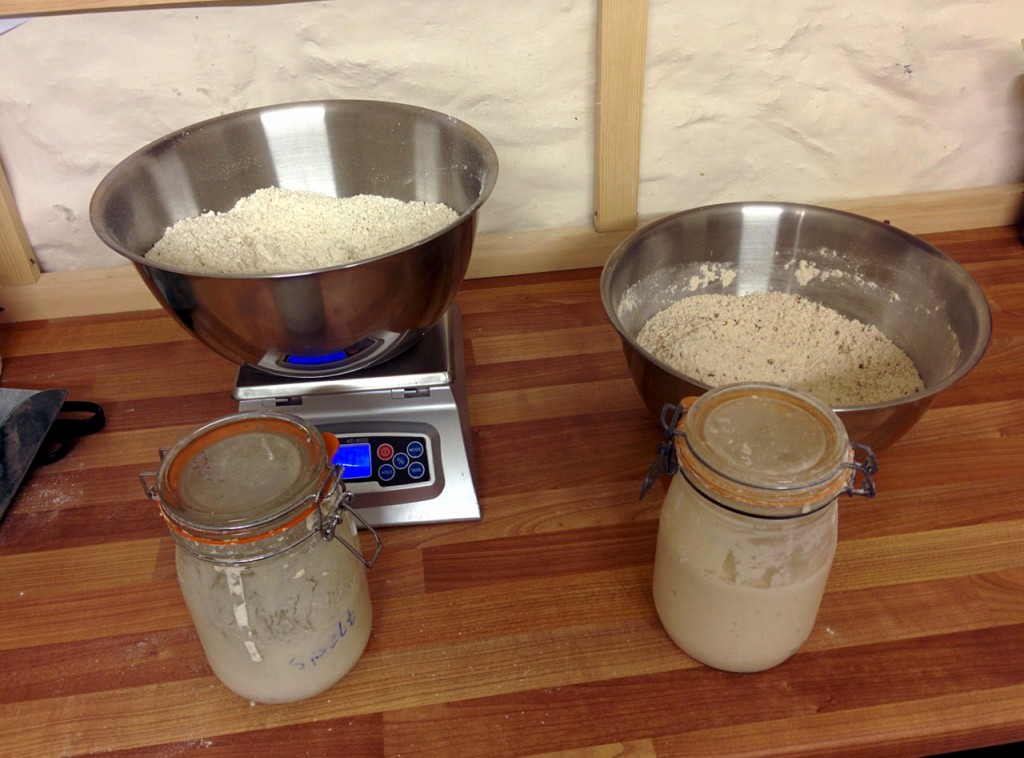 Here we are at the start. It’s about 9pm and I’m making 2 different types of bread for tomorrow. On the left here is the makings of my honey spelt and on the right is “Maltster”. This is a granary style bread. I keep separate spelt and wheat starters and the jars are in-front of the bowls. Because I have enough starter in the jars I’m going to use it directly from the jars which have just come out of the fridge. I’ve weighed out the flours (the maltster is Shipton Mills three malts and seeds (the light version) and the spelt is a 30/70 mix of wholegrain and white spelt. Salt is added too and its given a mix just to disperse the salt.

These loafs are using 30% (bakers percentage) of sourdough starter in the mix. Until very recently I was using 40% sourdough starter, but the new bakehouse is a few degrees warmer than the old kitchen so I thought I’d see what happened when I dropped it down to 30%. This is the first time I’ve tried the spelt loaves at 30%…

(Note – the Moorbakes bakehouse is in the process of being renovated and it’s almost done here – all that’s missing is the nice acrylic splashbacks that are currently on-order – hence the wooden batons and bare wall behind the bowls!) 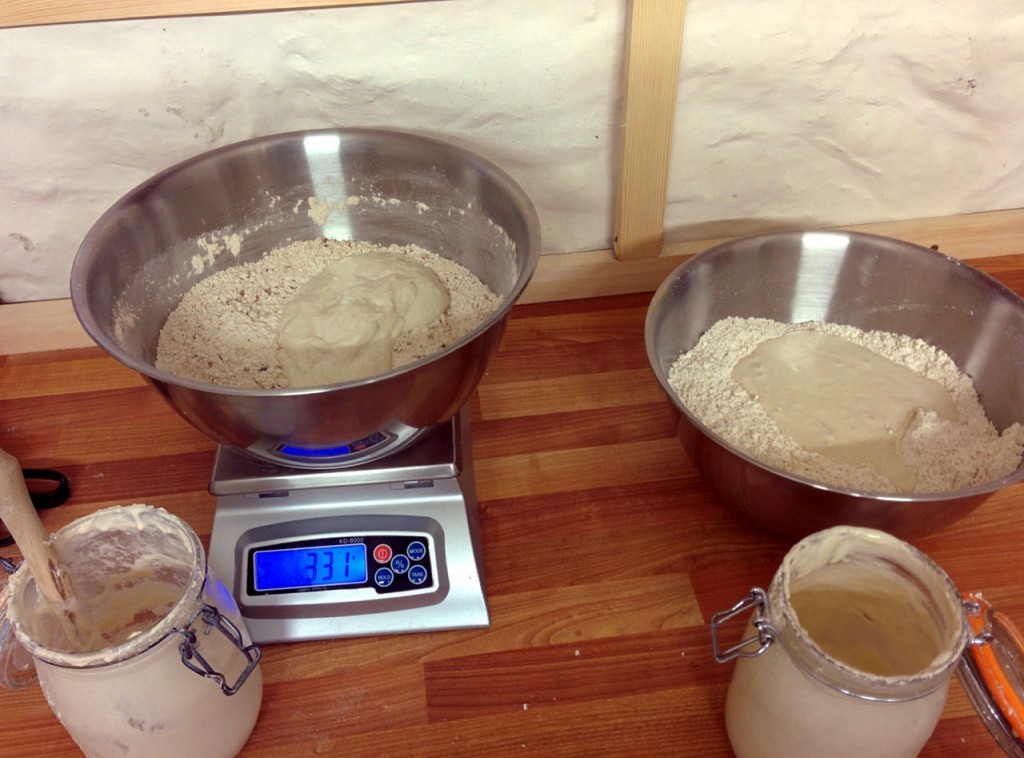 Starters added into the bowls. 330g starter in each one. 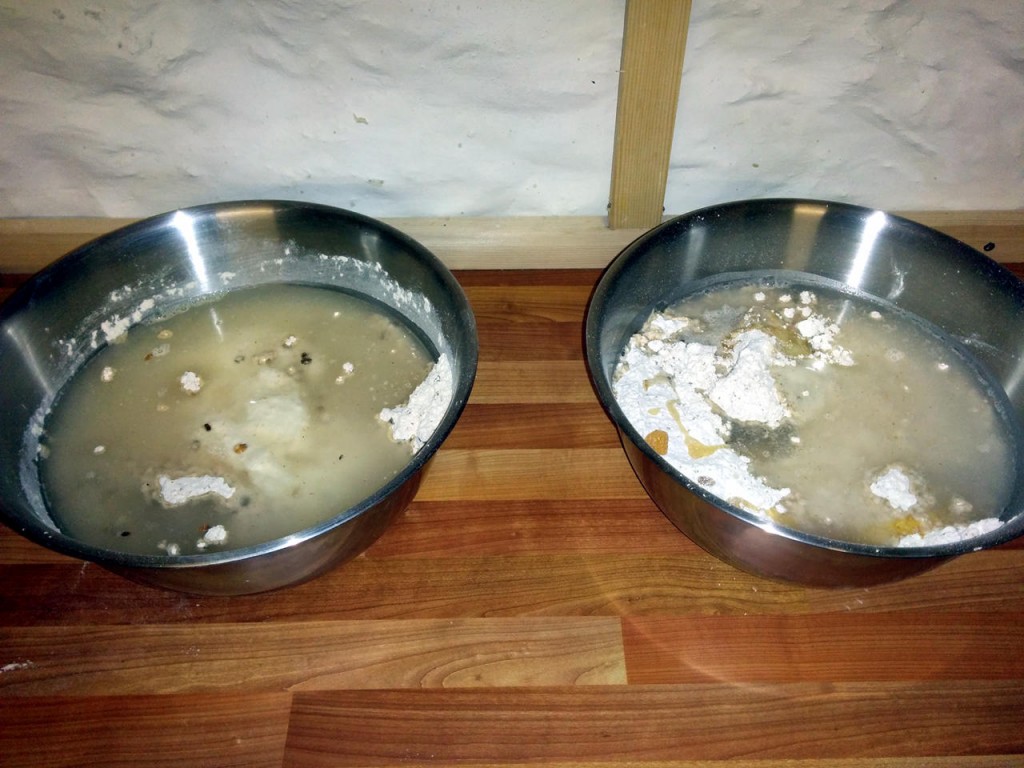 I’ve now added water and honey into the spelt mix and just water into the maltster.

The next step is to mix the dough in the bowls – nothing special here, use one hand as my mixer and the other to turn the bowl – when all the water is incorporated into the flour, tip it out onto the bench and (literally) push it about a bit to make sure its mixed. This isn’t kneading, just mixing. 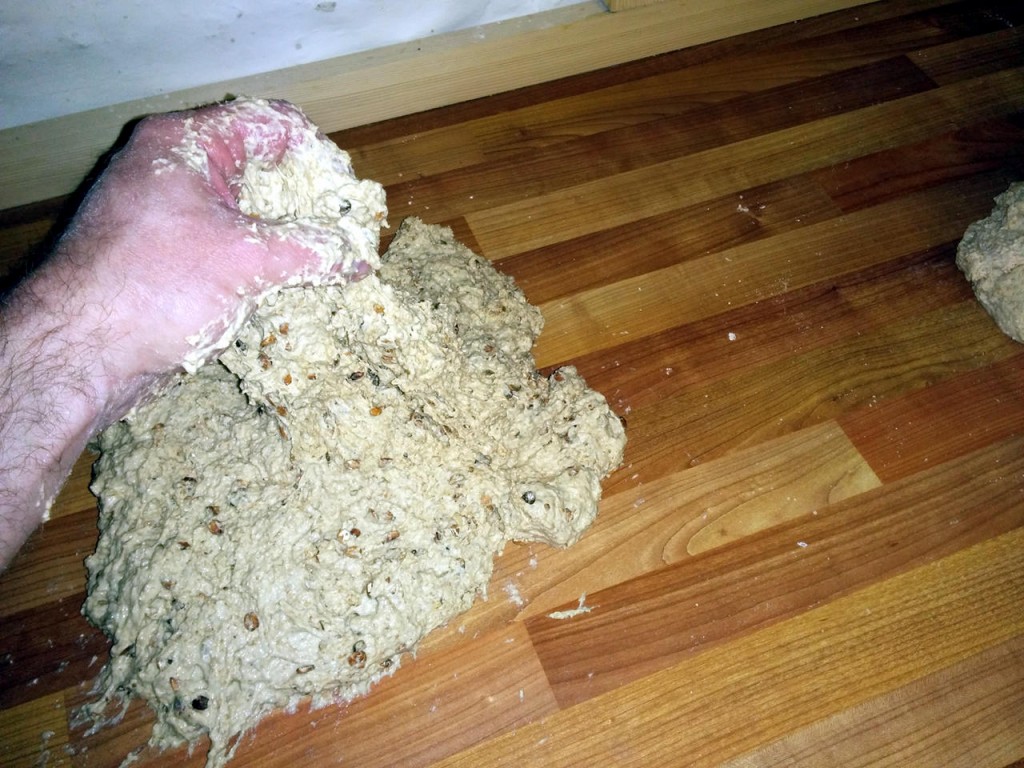 This is the maltster mixed into a sticky/shaggy lump. You can just about see the spelt is the same to the right.

At this point, we do some magic. Well, no, not really… But after doing this for a few years and occasionally being distracted, as well as reading up on no-knead breads and so-on, what I do now is just cover them and leave them alone for half an hour. This may be autolyzing, but some will say that a “true” autolyze won’t have salt (or even yeast) in it. Whatever – all I know is that after half an hour’s wait, the dough will be very different and even the maltster which has a lot of wholemeal in it will pass a “window pane test”. 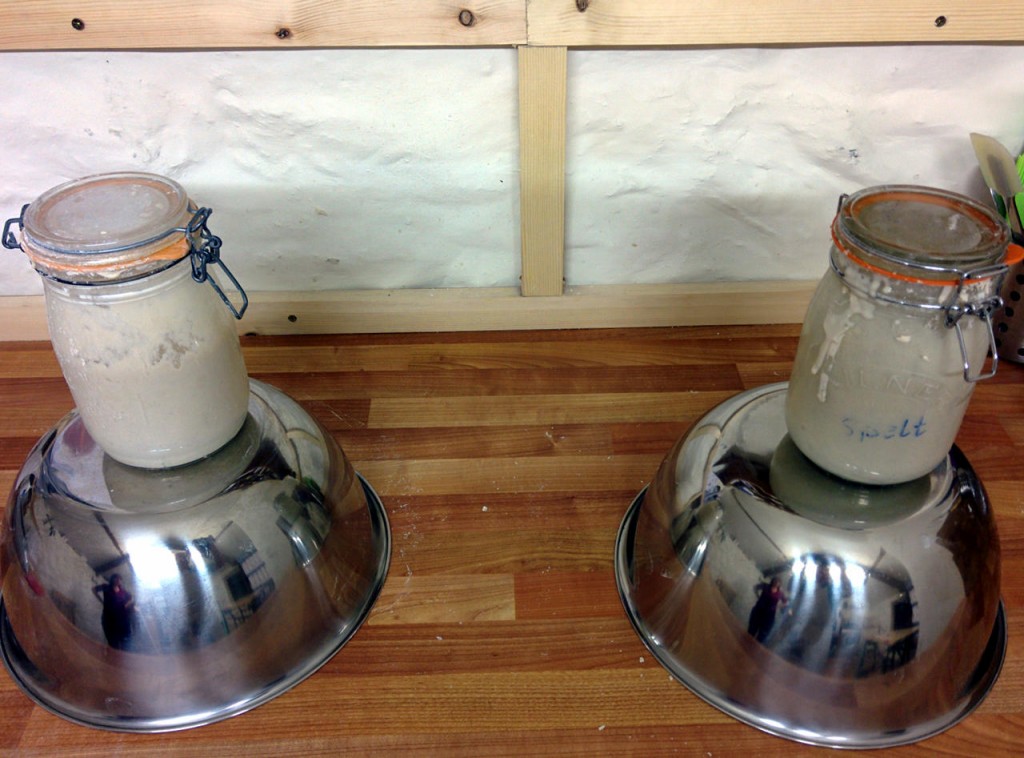 The doughs relaxing after mixing. At this point, I set a timer and top-up the starters and put them back in the fridge. Sometimes I even clean the outside of the jars… 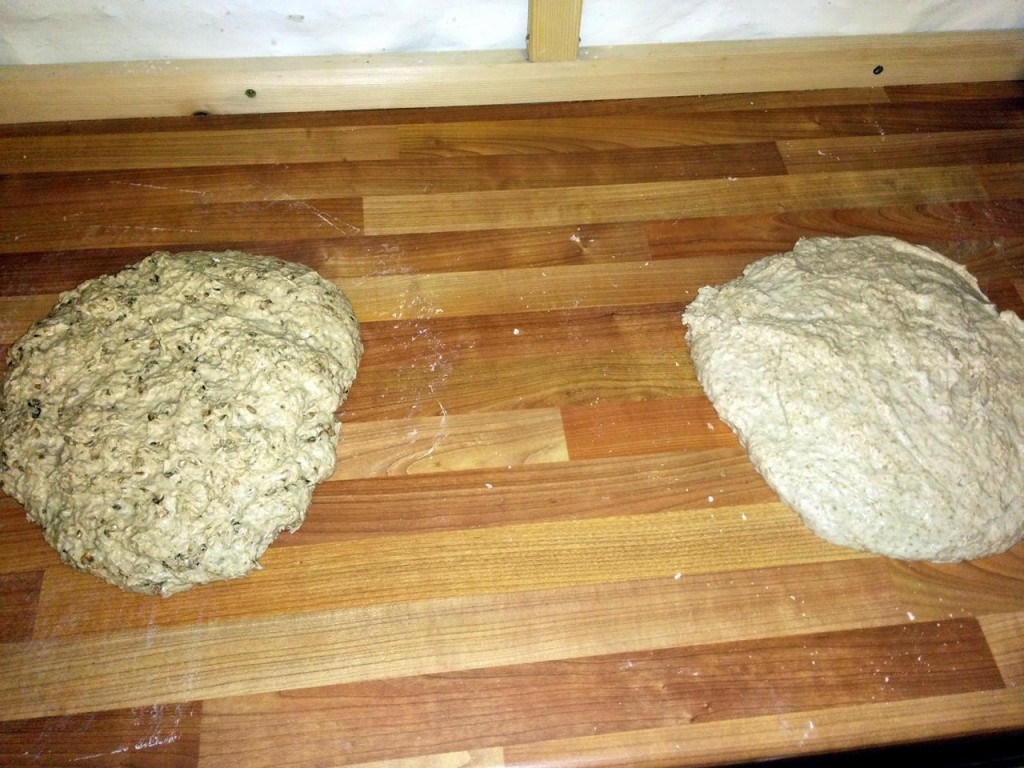 After half an hour.

Quite hard to try to demonstrate a window pane test with one hand… But compare that with the photo above – it’s smooth and stretchy and I’ve not kneaded it at all. 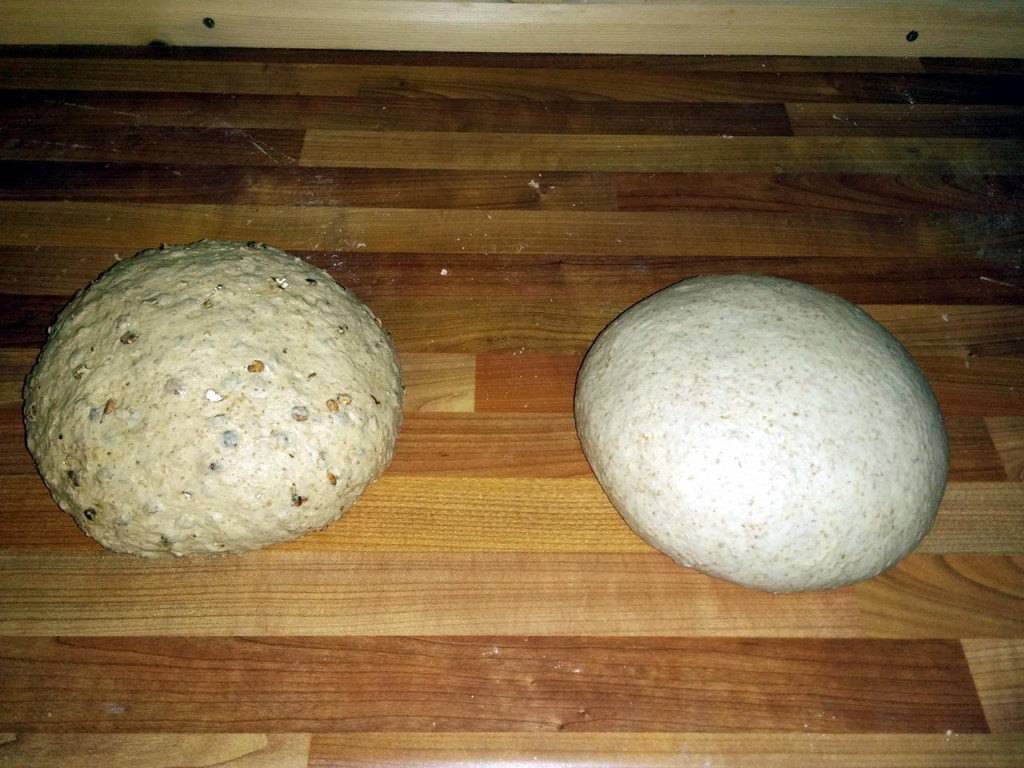 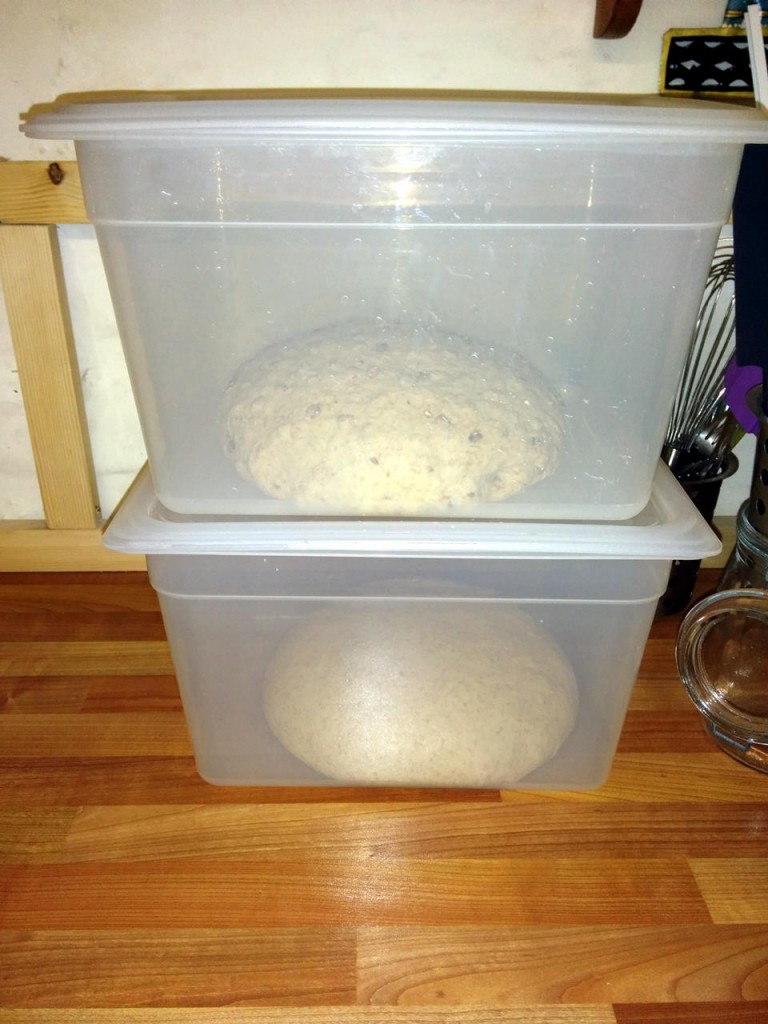 Into the fermentation tubs for an overnight snooze. (I’d use the metal bowls, but I know that they’re not quit big enough for this quantity of dough).

I did check the temperature in-case anyone wants to know – it was 24C.

So that’s that. It’s taken 10 or so minutes of my time over the space of an hour. This is my “Low Impact” soudough baking. Not much kneading. Does it make a difference? I don’t think so at this stage. I do have a machine (or 2) that can knead dough and I do use them, but for smaller lots like this, it’s less washing up if I leave them on the bench… 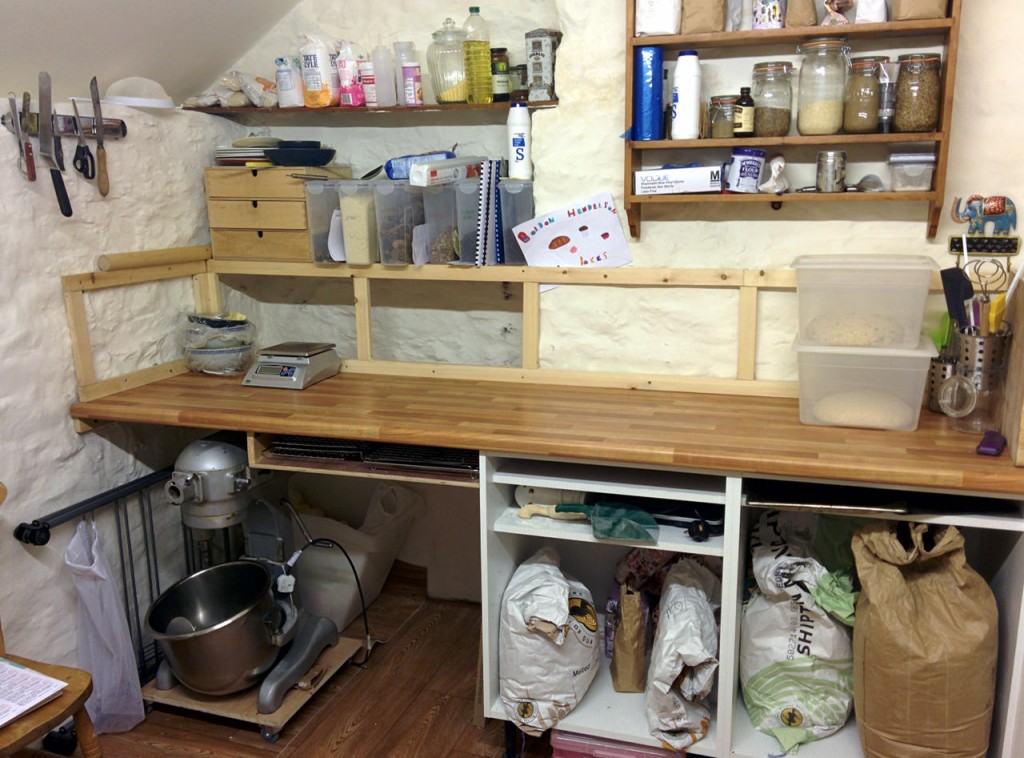 This is the moorbakes “bakehouse”. Well, the workbench. The ovens are behind me… The splashback will be fitted soon!

so off to bed now and up at about 6:45am tomorrow morning, ready for part 2 when we get them ready for the oven and Bake!