We use apple butter to make our lovely applejacks. It’s a concentrated, caramelised apple purée with a little sweetener (if needed) and spices. It can be used as a spread on toast, or a filling for pies and slices, and because its concentrated, a little goes a long way.

This is not an exact recipe, but just a general idea. It bottles or freezes very well and will keep for many months. It will take you 2 to 3 hours to make, but the results are well worthwhile

If bottling, then you will need to be confident with the process – it’s not difficult, just keep everything clean and hot. You  can recycle existing jars and lids, but do make sure any rubber seals are perfectly clean and in-tact.

You’ll need a large quantity of local apples. Probably about 4 apples per “1lb” jar, some sugar (or other sweetener such as agave nectar or rice syrup, or stevia, xylitol, etc.), and spices such as cinnamon, cloves, allspice and nutmeg.

To freeze: pour into freezer bags, squeeze out as much air as  possible before sealing, allow to cool and freeze. Defrost overnight in the fridge before use.

Store opened jars and defrosted packs in the fridge and use within a week. 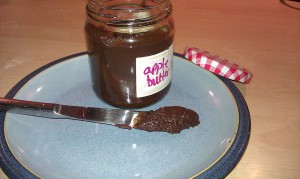