Our sourdough starters (also known as a levian or mother) are made from nothing more than good organic flours, water and the natural yeasts and bacteria that are already present in the flour. The natural yeasts produce carbon dioxide to rise the bread, giving it its light texture, and the bacteria produce lactic and acetic acids which improve the keeping properties of the bread and impart their own unique light sour tangy taste – hence the name; sourdough although technically, that name was originally used in the early Americas to describe the early prospectors – old sourdoughs – Until then it was simply called levain and was in widespread use for thousands of years until the ale brewers got good at keeping their yeasts going when the bakers (in Europe, at least) cottoned on and starting getting their frothy yeasty stuff from them and making and maintaining their own barms without the sour component.

Note that we’re not that fanatical about an overly sour taste here at Moorbakes, so our starters and levian are maintained to try to minimise the sour but maximise the flavour and keeping qualities.

The initial ferment/rise time of the bread is between 5 and 10 hours depending on the ambient temperature. This is much slower than using commercial yeasts, but the slow rise improves the flavour and allows the gluten to naturally develop and stretch and the additional lactic and acetic acids improve the keeping qualities. Kept well, our sourdoughs last a week without going off.

Allergy advice: The Moorbakes kitchen handles sesame seeds and various nuts, seeds, etc. as well as milk and eggs and while we take reasonable care, no guarantee can be given that products made without these ingredients will be completely free of them.

This  loaf is made a blend of organic stone-ground wholemeal flour white flour. The addition of wholemeal gives it more texture and flavour than the pure white sourdough. It’s well-fired for a crisp crust and a bit more flavour.

The loaf shape varies according to who its being produced for. Currently the majority of small ones are hand-shaped, so like above without the banneton lines and the large ones have 4 parallel scores turning a round loaf into a large oval which makes for easier slicing.

Full of flavour with a crisp crust and soft, chewy interior with a mild sourdough flavour. Will last for a few days then make great toast! (if if lasts that long at all!) 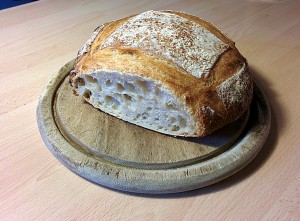 This is a granary® style loaf made with Shipton Mill organic light malthouse flour and our white wheat flour sourdough starter. It’s well fired to produce a darker and crisp crust.  The grains and seeds in the flour add a level of texture and flavour that’s hard to beat. Perfect with nothing more than some good butter.

(Back to the top)

Spelt isn’t to everyones liking, but the addition of a local honey to the dough helps a little with the rise and adds its own delicious flavour to this spelt loaf. (Very occasionally we can’t get local honey, so we substitute a fairtrade, organic variety)

Although related to wheat, spelt is sometimes used by people who have a level of wheat intolerance.

We use a mix of wholegrain and white organic spelt flours in the dough and a 100% spelt sourdough starter. It appears darker on the outside due to slight caramelisation of the honey as it bakes.

(Back to the top)

(More to come when we’re perfected the recipe!)

The whole meal is our 100% wholemeal wheat loaf. Made from stoneground organic wheat and slowly risen overnight to improve flavour and texture.

Confused about wholemeal vs wholewheat? Don’t be! In the UK they mean the same thing. The names are used interchangeably – mostly for marketing purposes.